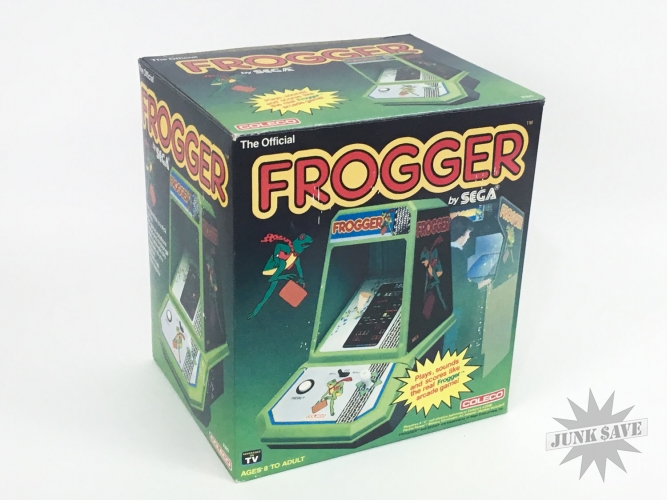 Vintage original Coleco Frogger tabletop from 1982 in stunning museum quality condition. As the creators of the 20-year-old website www.miniarcade.com this is the nicest boxed Coleco Frogger we've ever seen. This is as close to "factory sealed" as you will find, and sealed new Coleco tabletops are going for $1500-$2000 (we've never actually seen a sealed Frogger though and is not likely because the tape glue has usually dried out and become unsealed).

This Frogger box is stunning. No yellowing to the box, is super crisp and clean. No smoke or musty smell. No handwriting. No tape or stickers except the original factory tape. No moisture or water stains. Most importantly no rips or tears near the box top! It has shiny surfaces, a tight rectangular shape, even the green box bottom is pristine. Look at these corners and edges.

Inside the box its obvious the game was never handled or played. The instructions booklet, t-shirt offer, and Coleco catalog are inside the original plastic baggie just like new. The styrofoam is amazing and bright white with none broken, and the game is contained in the original plastic baggie. The game is unplayed and new, we only tested it carefully to make sure it still works great.

One interesting aspect of the box it has a factory misprint error - if you look at the front and side of box (by "Sega" logo and by the kid at the arcade machine) you can see what looks like vertical white tire marks (ironic for a Frogger game). The box printing machines must have been wonky that day, since this is how it was manufactured we don't consider box to be "damaged" because you could theoretically find other Coleco tabletop boxes released with a similar misprint.

You have to look pretty hard to find other issues, for instance in the 4th photo you can see the back of box near top flap has just the slightest amount of "bulge" curve. And the front of box has a small (less than 1-inch) break to the outer layer of cardboard graphics probably caused by a price sticker removal but its barely noticeable.