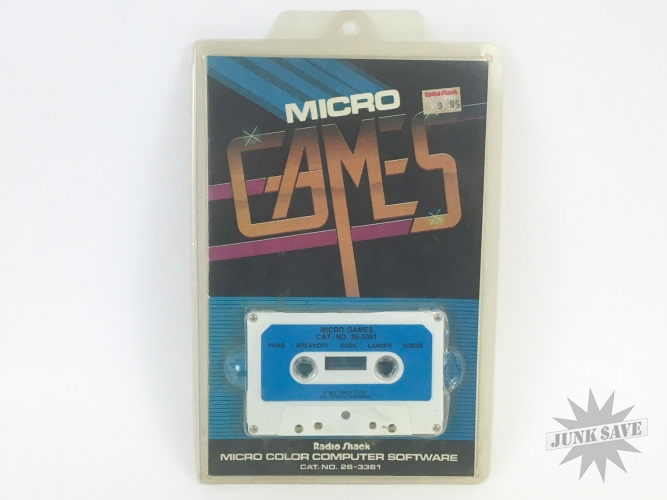 A scare "Micro Games" software cassette for the obscure Radio Shack TRS-80 MC-10 "Micro Color" computer, containing 5 games: Pong, Breakout, Eggs, Lunar, and Horse (same games are on both sides of tape). Released in 1984 as catalog number 26-3361. The TRS-80 MC-10 is a scaled-down version of the original TRS-80 Color Computer computer from 1980. To keep the price affordable for consumers the MC-10 had only 4K of RAM, but an external 16K RAM module was available to be added. If you get an MC-10 computer there weren't many games released for it, so you'll need this tape to keep you busy!

Package art has classic generic/corporate 80's space blandness but amazing, there is some age yellowing and dimples/wear to the plastic clamshell, tape inside looks new but hasn't been tested. From the MobyGames site (they have screenshots too):

Micro Games is a collection of five small games written in Basic.

Pong is a conversion of the Atari game. It's for two human players who share the same keyboard and the game goes on until one player reaches a score of fifteen.

Breakout is based on the the arcade game but uses a horizontal playfield with the player's bat being located to the left of the screen. There are seven rows of bricks in different colours each having a different point value. The player can use five balls before the game ends.

Egg Catch is an arcade game where a bird flies back and forth and drops eggs. The player controls an egg catcher and has to catch the eggs before they hit the ground. It's also possible to shoot the bird. Points are scored for catching eggs and shooting birds but are lost when eggs hit the ground. The game ends when the ground is all covered with eggs.

Lunar Lander is a simple version of a Lander game. A spacecraft is quickly descending and the player has to land it safely by achieving zero altitude at zero velocity. The game is played with the number keys which are used to apply thrust. Higher numbers release more thrust while lower ones release less.

Horse Race is a simple betting game. Five horses are lined up and upon the press of a button they begin running. The player simply has to guess which horse will win the race.